The Mark Andy stand at Labelexpo in Brussels marked a significant highlight in the cooperative partnership between the American narrow web press manufacturer and the Danish pioneers of surface treatment.

The VE1A corona treater fitted to the Mark Andy Digital Series press on working demonstration was the 10,000th narrow web unit to be built by Vetaphone.  Speaking for the company, CEO Frank Eisby said: “With almost 70 of our units working, or on static display at the exhibition, we are delighted that number 10,000 was fitted to a Mark Andy press – a great example of two top brands working together.” 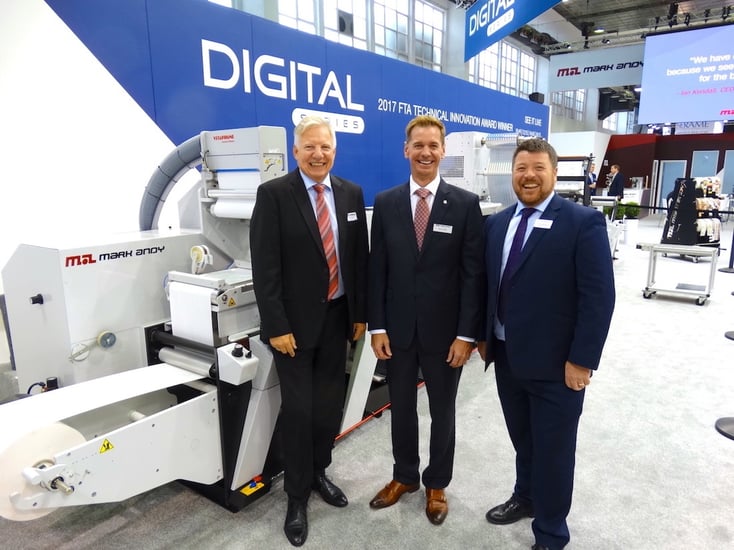 With a claimed global share in narrow web of some 80%, Vetaphone has long set the industry standard, but the agreement with Mark Andy is as recent as 2014, when the press manufacturer elected to make the Danish company its preferred supplier of corona treatment for all European presses.

Speaking for Mark Andy, VP Sales & Marketing Steve Schulte responded: “Mark Andy needs to choose its co-suppliers carefully so they match our own exacting standards of design, engineering, and reliability. We are delighted to have Vetaphone on board, and are very proud to have their 10,000th narrow web unit on our Digital Series line in Brussels – it seems appropriate that we came together at the right time!”

Nick Coombes, Director of The Publicity Studio, is a well-respected veteran in the label and folding carton industry. With an international reputation and passion for printing, Nick provides an independent voice and an extensive network of contacts that he’s established over the past 40 years.