Dutch Graphic Group (formerly Graphic & Mail) has installed the first Mark Andy Performance Series press in the Benelux to be fitted with ProLED curing. The 330mm (13 inch) P5 press is a six-color machine with delam/relam capability and single die station.  It replaces two presses, and according to company owner Nino Venezia: “has given us a 50% bigger format and four times the production speed!”

Established in 2000 by Venezia and his wife Anita, the company is based in Venlo, The Netherlands, close to the massive AGR wholesale auction market for fresh fruit and vegetables.  This generates a huge demand for labels that Dutch Graphic Group supplies in run lengths from 2,000 to 3 million and more.  According to Venezia, no two days on the production floor are the same, so he required a flexible print platform that would be easy to learn and operate.  After scanning the market for likely suppliers, Mark Andy was his preferred choice, and the P5 was installed in fourth quarter 2016. 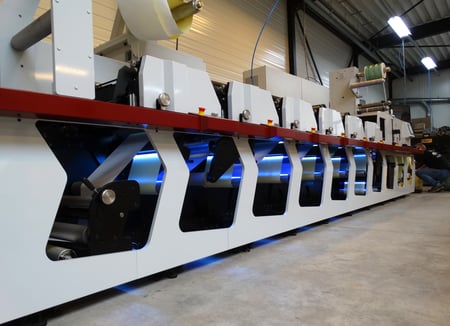 The P5 offers the company a 50% bigger format and twice the production speed of its predecessor.

From a standing start, the operator Peter Geraedts needed just three days tuition to have the P5 running at 160m/min, and the press is currently on double-day shift, with an evening shift available for busy periods – though such is the improvement in output of the Mark Andy that existing work is run off in quick time.  From a small start, the company has grown to employ 15 staff across two production sites, and has great scope for expansion.  Traditionally serving customers within a 25km radius, the emphasis is now on international growth, with many of the leading supermarket chains as contract customers.

It was this expansion program that prompted the name change from Graphic & Mail, because Venezia believed he needed to have brand that was both descriptive and more in keeping with the international nature of his business.

“We have enjoyed a 30% annual growth rate in each of the past five years based on our philosophy of a good price for high quality and fast response.  We know we’re not the cheapest, but our retained customer portfolio indicates that we are the most reliable, so the volume of repeat business is high.”

Currently producing mostly thermo labels on paper based substrates, Dutch Graphic Group is noticing a big swing towards PP material, with one of its major customers switching as much as 20% of its volume in one year.  With three customers buying more than €2m worth of labels each year, and one buying more than €6m, the logistics of feeding the hungry new Mark Andy has proved more of an issue than learning how to maximize its performance.  Although the P5 allows DGG to be geared up for short run work, Venezia says that 80% of his business is of run lengths of more than one million labels – rare in today’s market.

Dealing mostly with food-grade packaging, Venezia is working closely with substrate and consumable suppliers to keep ahead of the changing legislation on substance migration in printed packaging.  “This was one of the reasons we specified LED lamps in the UV curing system.  They have instant off/on, consume less power, have a longer lamp life, and crucially generate no ozone.  LED has to be the way forward, especially with sensitive products like food,” he explained.

Now, with sons Enzo, soon to be made General Manager, and Gino joining in Production, there will be four family members involved in running a company that has enjoyed seventeen years of unchecked growth.  Believing his work ethic to be successfully proven, Nino Venezia said: “We’re big enough to cope and small enough to care – so our customers know they can trust our word and respect us for it.  This has to come from the top down, and we have no intention of changing as we grow,” he stated. 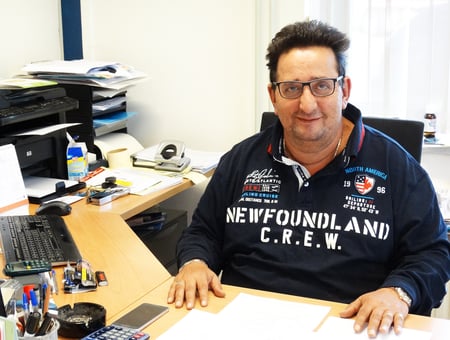 Nino Venezia started the company with his wife Anita in 2000.

This trust is easy to understand when he explains that he always passes on savings to his customers: “We have a target margin to hit and no need to exceed it – most things in life cost more each year, so it’s nice to surprise customers from time to time with a price cut – it’s all part of our loyalty drive,” he concluded.

With growth looking to come rapidly – the company has just employed its first salesman, and also a marketing specialist to maximize on the change of brand and new initiatives that Venezia has planned, there is already a need for another press – whether flexo, digital, or hybrid.  Whichever way Venezia goes, one thing is for sure – his company won’t stand still.

Chandler Davis is Senior Manager, Global Marketing at Mark Andy. She is a University of Missouri graduate with a passion for social media, packaging design, and providing creative spark to the technical products within Mark Andy's portfolio.